How it all started:
First we began by finding an area we both had an interest in which was exploring and promoting body positivity online. As this project required an element of coding we were unsure how to start originally. Eventually, Mary came up with the idea of programming a Twitterbot to help us spread body positivity on Twitter. We began by creating @positivebody2 on Twitter (https://twitter.com/positivebody2) and then Mary got cracking on programming the Twitterbot. Below we have posted an example of how you would create a twitter bot to retweet tweets that have #bodypositive or #selfcare within the tweet. 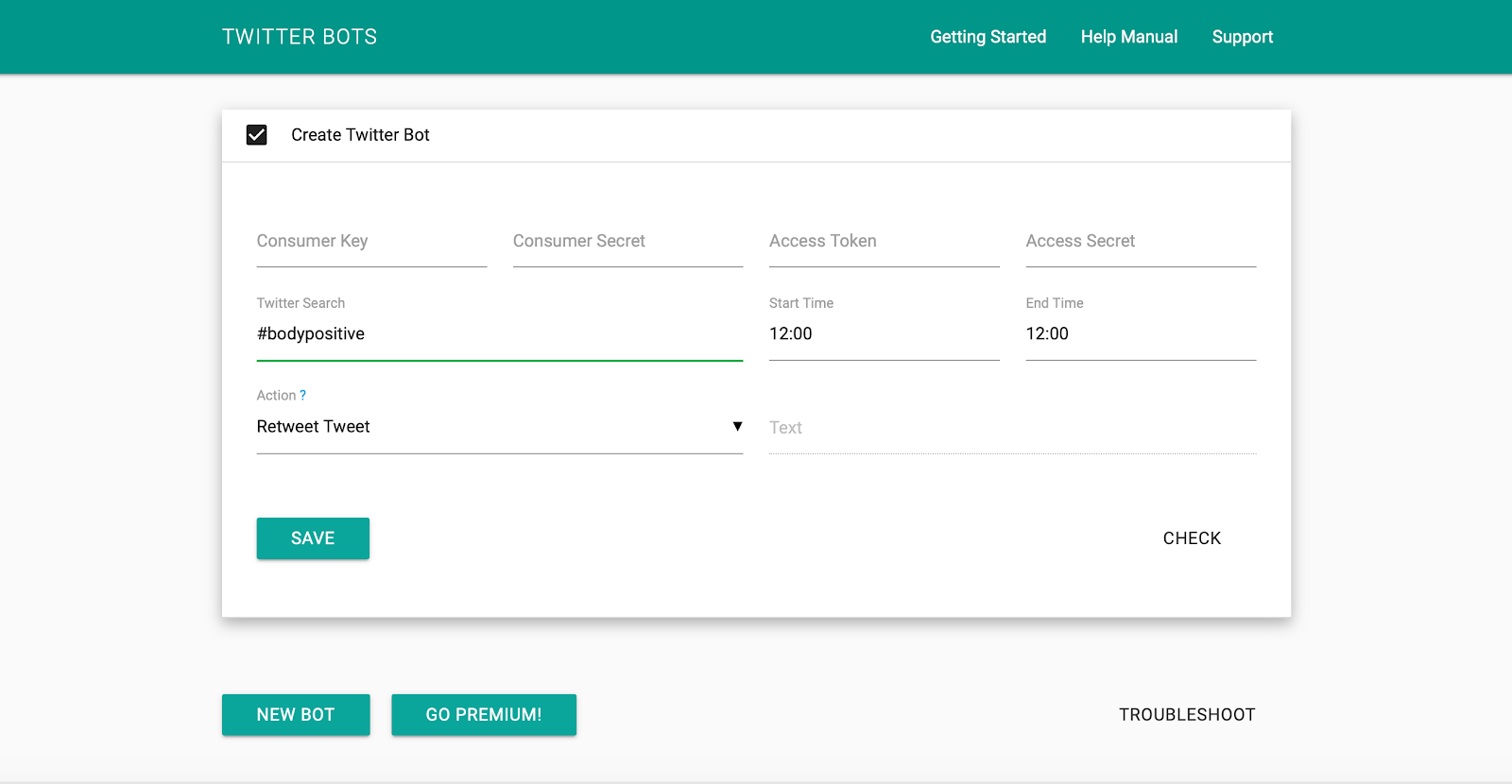 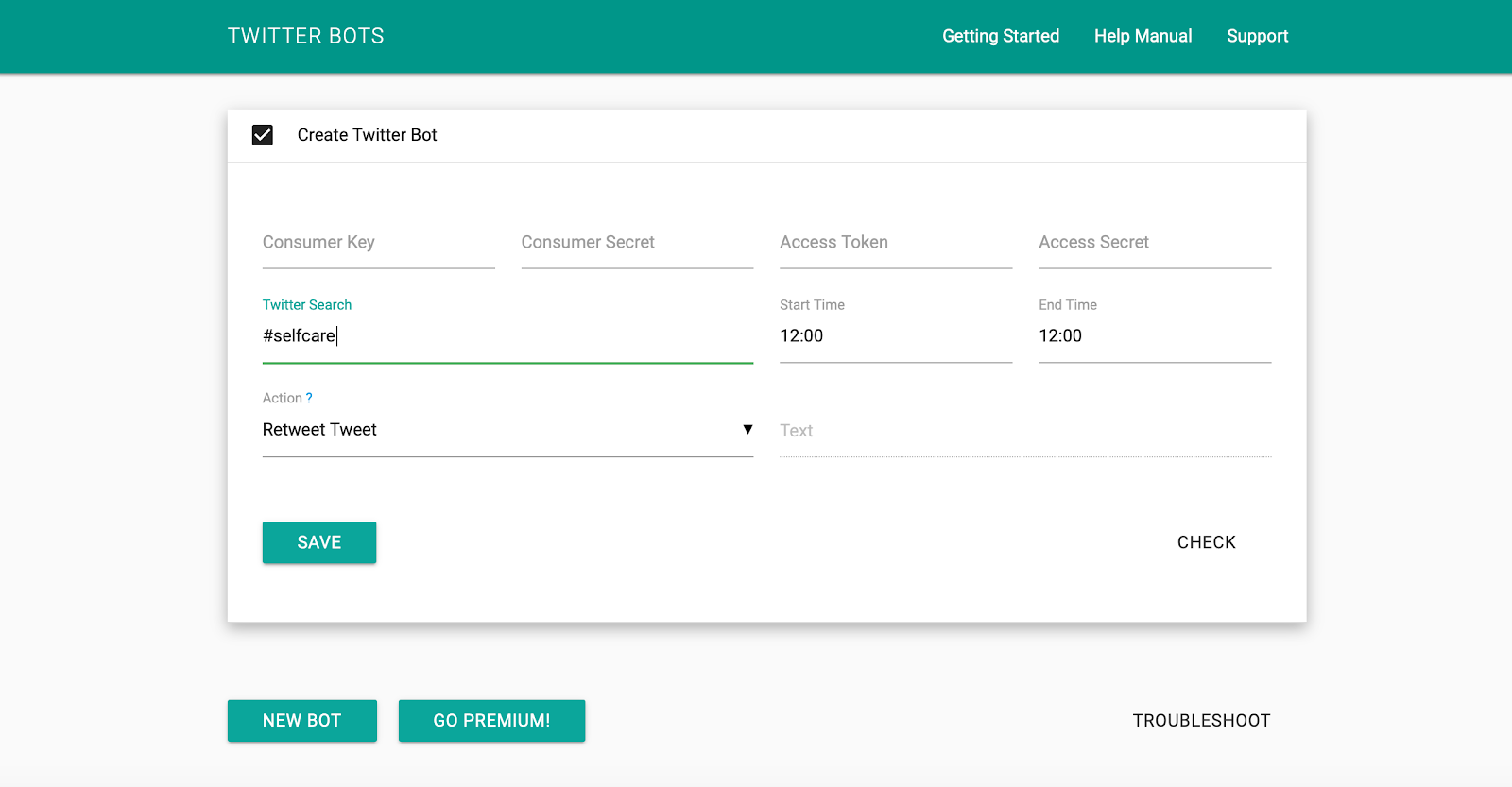 What we did:
Once our Twitter account was created and our Twitterbot programmed we had to get some content for our Bot to retweet so we started following some of our favorite body positive influencers. We tried to follow an assortment for verified accounts to give our Bot multiple different options in its algorithm. 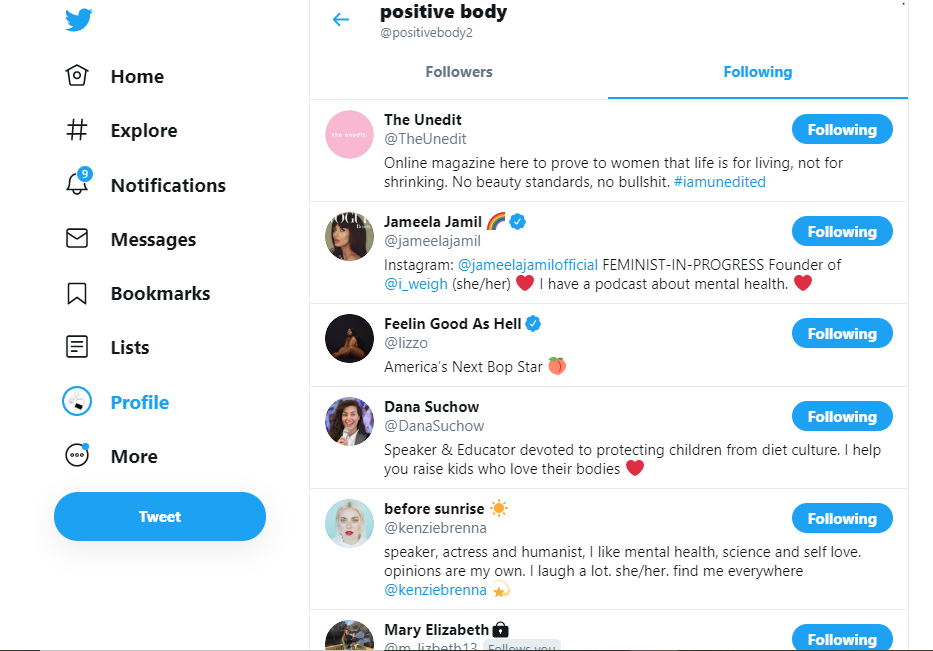 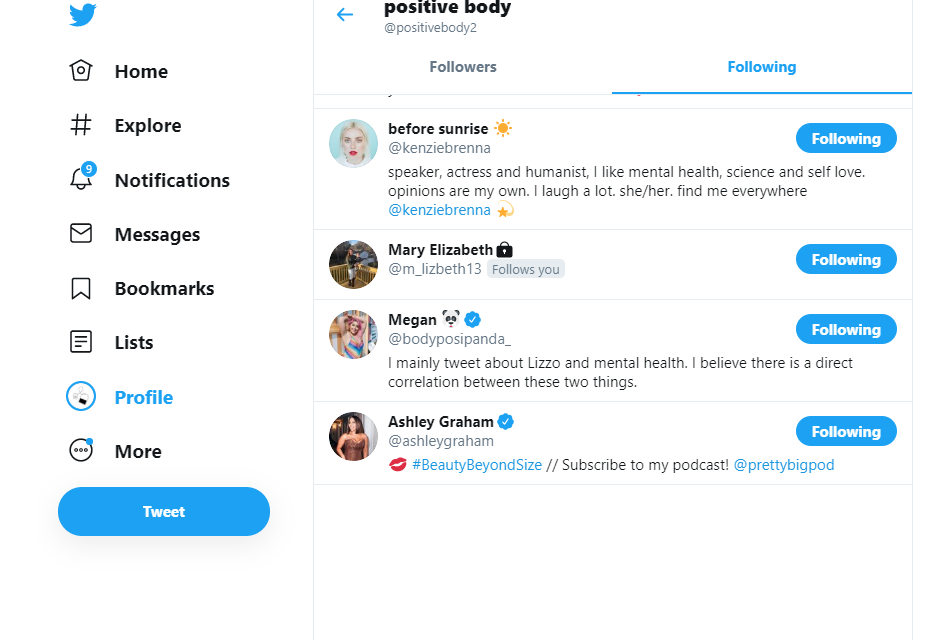 In addition to the Bot’s retweets, to give our account a little more substance, we would also share content ourselves. We would share articles, GIFs and other body positivity content that spoke to us. Content shared by us usually comes with a note about why we felt it was meaningful content that should be shared for the promotion of body positivity. We looked for things that had either #bodypositive #selfcare or included those words in the message. In a world where everyone is showing off different aspects of their lives, we wanted to promote a positive environment. We discussed and looked up different articles that weren’t just about fat shaming. We looked at body expectations for new moms, children, and even men. 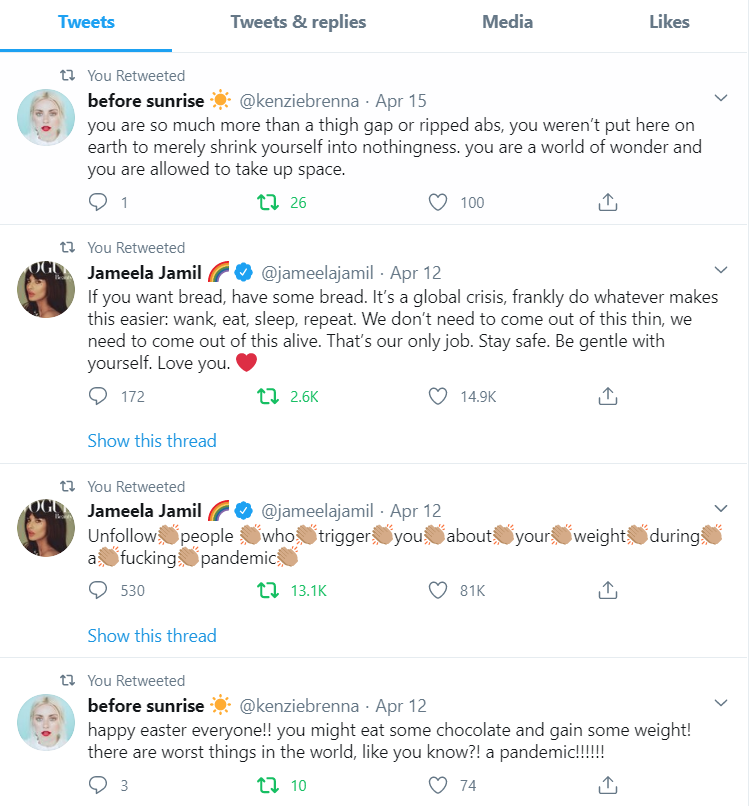 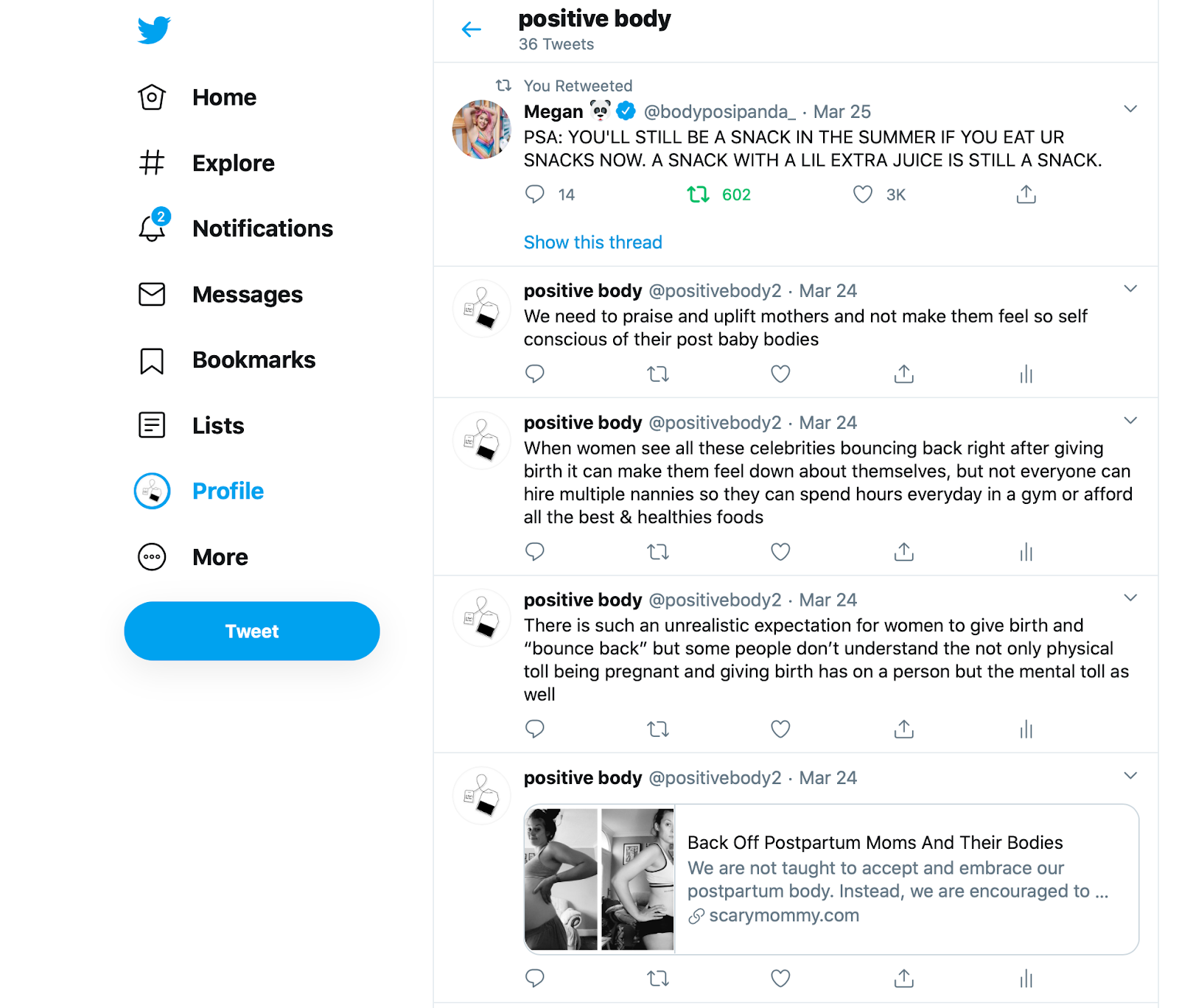 Our Conclusion:
While our original plan had involved more in-person work together, circumstances changed for obvious reasons, but we were determined to bring positivity to our twitter page. Our initial plan was to run the Twitterbot for an extended period of time but there were some bumps in the road getting things going. Something that became problematic to our Twitterbot was some of the tweets that would come up under #bodypositive or some of the other hashtags we were searching were either focused on weight loss or provocative advertisements for certain types of Twitter accounts. While we both believe everyone has the right to promote what they want/believe in, that wasn’t what we were looking for in our research. Below we’ve posted just one example of a tweet that comes up under #bodypositive. This type of tweet wasn’t the type of information we were looking for. 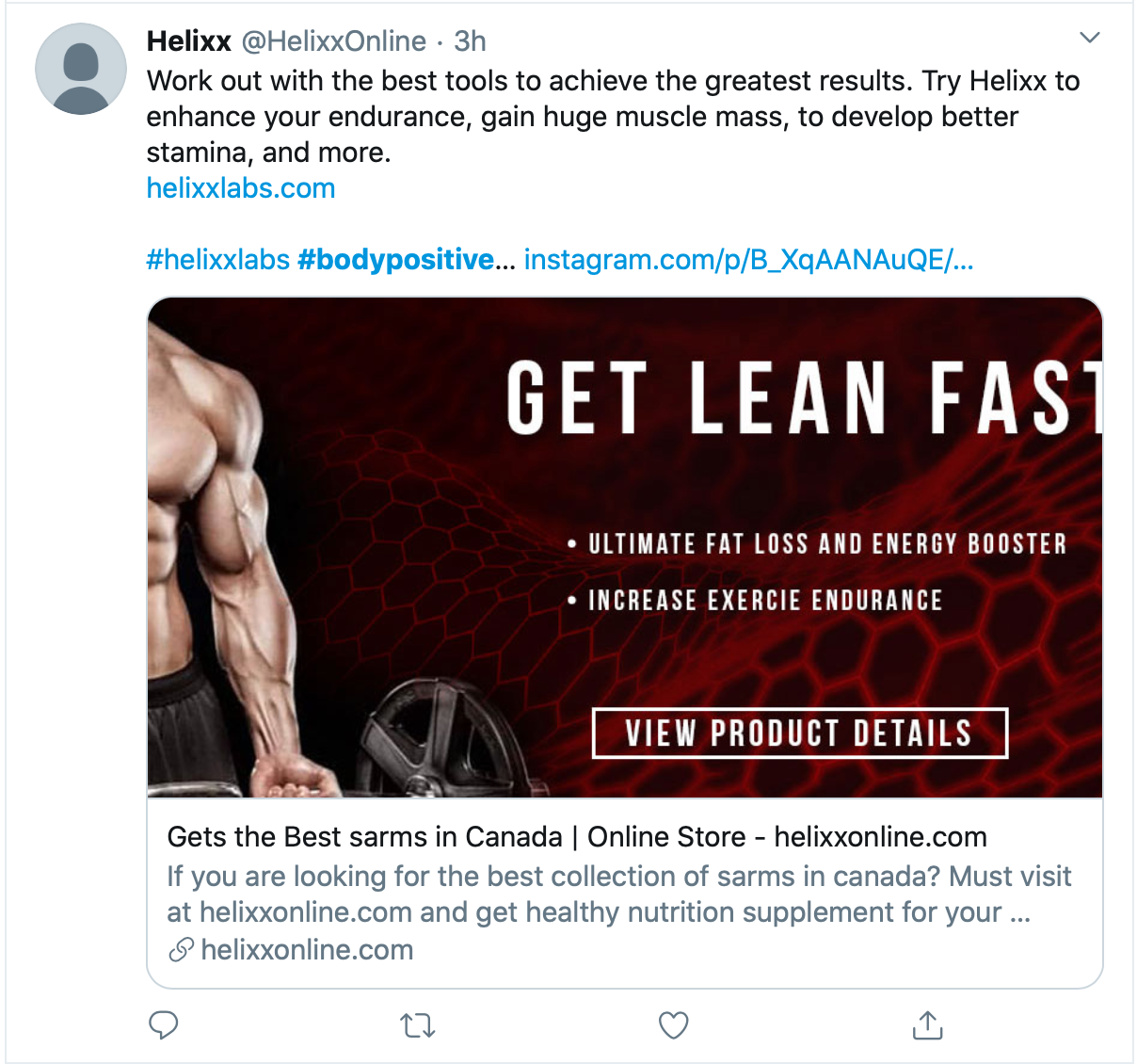 Because of the quite wide variety of tweets that came up under those searches we focused less on the bot and more conducting the hashtag searches ourselves along with actual internet searches on relevant articles that we felt spoke and brought positivity to our page.

Final Thoughts:
While in the end we might not have accomplished 100% of what we set out to do, we are proud of the content we brought to our Twitter page and hope that maybe someone who needs some extra positivity in their life stumbles across it and it brightens their day.